We finally made it back out on the boat this weekend. It has been over 2 months so it was a bit exciting!

We got some friends up from the Gold Coast to go spearfishing. Saturday had been a perfect smooth day on the bay, but we remained landlocked, hoping that Sunday would be the same.

Some northerly winds rolled in during the morning, making the trip up to Moreton Island a bit bumpy. Who knew that my back muscles had previously been accustomed to the boat pounding through the chop? After having a long break, my muscles are really hurting today.

As we drove along, the water just went from green to greener. As we left the bay and went into open ocean it changed to a lighter green, then back darker and would simply not go blue. The frustration on the boat was obvious.

We decided there was still enough clarity to dive. Time to get geared up.

“Hey Ryan, where did you put our wetsuits?”
“Oh shit I forgot them”

Oops. That was kind of important!

The water has been about 25 degrees Celsius so you would think it wouldn’t be too bad without a wetsuit. That is wrong. It did not take long for us to start shivering.

I tell you what, wearing bikinis with gloves socks and a weight belt is not a good look. No photos allowed, so use your imagination.

Wet suits are not only good for the cold but also for sheltering from the sun. Our skin had not seen much sun in the last two months so it would have been good to have the protection. We went through a lot of sunscreen.

Another thing wet suits are good for is protection from stingers. I know I react badly from blue bottle stings, so in some areas where the boys had seen them I could not get in the water. *sigh*

Short stints in the green water, mostly spent shivering did not make for very good fish hunting conditions. Lucky for us we brought along the fish whisperer.

his catch at the end of the day: 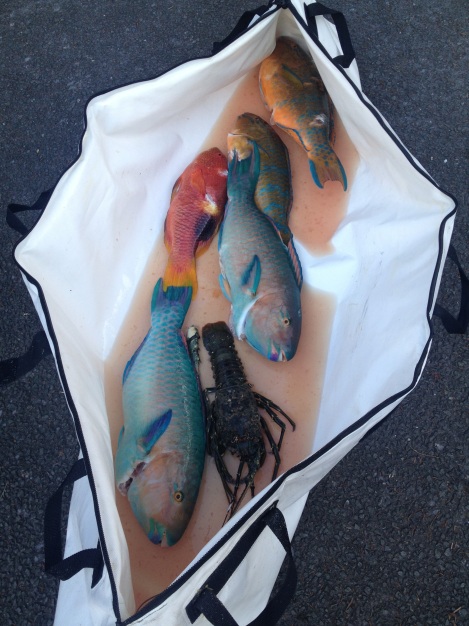 The middle of the day was spent assisting some guys who had broken down on their boat and could not get their motor started. We managed to find a dive boat who would tow them back to land, unlike the super cat that was out there and refused to help.

It was a fantastic day out, despite the little bit of chop.

What better way to end a weekend than by gorging ourselves on a delicious seafood dinner. 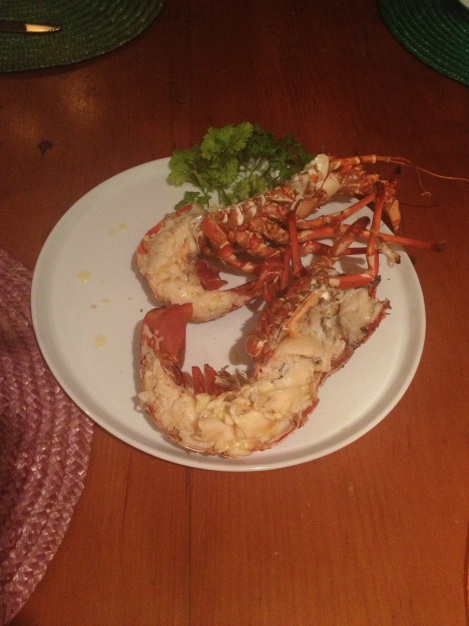 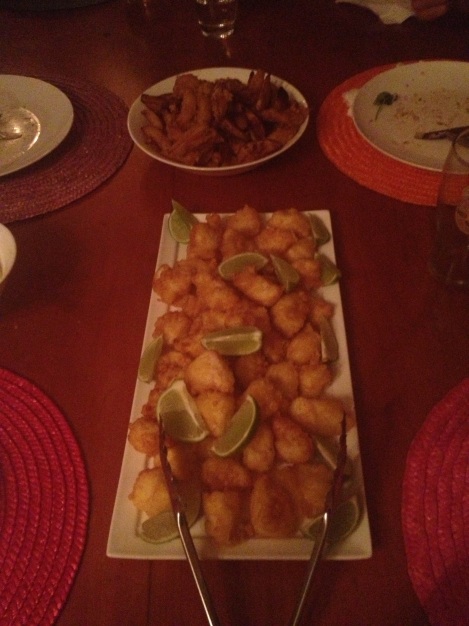 the fish was cooked with beer batter. To see the recipe, click here

4 responses to “Fifty shades of green”