Buses are a very cheap way to travel around South East Asia. Not necessarily the fastest.

You know how your parents always told you to go to the toilet before getting in the car? I recommend keeping that advice every time you are about to hop on a bus when travelling. Not just before the trip, but during any of the stops as well.

A bus ride that is estimated to take 4 hours, could take up to 8 hours. Timetables are not a big deal in SE Asia.

Let me take you back to early January 2012. My friends and I had just survived the New Years Full Moon party in Koh Phangan.
Flashback:

We had to drag ourselves to Phuket. Being at the end of our holiday, funds were limited to the bus was our only option. This didn’t seem too bad, we had survived the bus trips in Laos after all.

Of course, after the partying we had endured, rehydration was a big issue.

The thing with buses in Thailand is that you don’t know if there will be a rest stop, or where it will be.

I followed my parents advice and went to the toilet before boarding the bus in Surat Thani. We drove for about an hour, where they made us change buses. Again, “make sure you pee before you get in the car” resounded in my mind and off I went to have a squat (not trying to be rude, but it’s what you have to do in Thailand).

The next stop was about three hours in. Given the whole trip was meant to be 4 hours, I thought I could avoid using another squat toilet and wait until our hotel in Phuket. Besides, I didn’t really need to pee.

Now bladder control is not an issue for me. I have been able to safely ignore those ads for “safety” pads, that cause me to imagine adult size diapers. If this ever changes, I will blame this fateful moment and the pain it caused me to suffer during the following hours. Surely I’ve done some long term damage.

About half an hour later I could feel a small urge. It’s OK, we can’t have far to go, I thought.

The trip then took another 2-3 hours. As time passed, I could feel the fluid entering my bladder very quickly. The pain got intense just as quickly.

Not even owning a she-wee saves you in this kind of situation.

I spent what felt like an eternity doubled over in pain, starring intently out the window, looking for any sign of Phuket.

The bus pulled over on the side of a random road at the entrance of Phuket. Not even a bus station or anything!!! Holy cheeseballs, what was I going to do?????

And then it was like the heavens opened up and rays of sunshine all focused on one building nearby. A brand new hotel. Not only would I get to use a toilet, but it wouldn’t be a squat toilet.

Now for all the guys out there who are asking, what’s so bad about a squat toilet? I never have a problem?
You just don’t want to know!!!!

Half doubled over, half running, I approached the hotel. Trying to look semi normal I asked if I could use their foyer toilet. The yes that came out of that Thai man’s mouth was the best sounding word I have ever heard.

And so ended the agonizing wait. 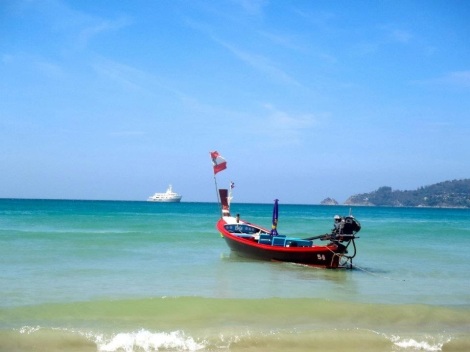