Our arrival in Korfos was very easy. There was barely any wind, and a taverna owner sat there eagerly next to his empty pier and ready to pass us the lazy lines that were already there. This made mooring so much easier, not having to drop anchor (we only have a manual anchor winch).

The view from the Taverna

There isn’t much I can say about Korfos. It was rather boring and the town not overly picturesque. The taverna owner, John, was nice enough and did a good job at making us feel guilty about not eating at the taverna. So we did. It was a mistake. Of course, we fell for the upsell yet again; and ended up paying lots of money for not so good food (it had been badly heated up in the microwave).

I was excited to see a Swiss flag on a very new looking 44.5ft Hanse that motored in shortly after us. Everything on this boat was perfect. It was clean, neat, and everything was nicely in its place. The couple on it were wearing new sailing gear and looked the part. Well, everything but the smiles. I did not see them smile once. When we tried to talk to them, they were not interested. My own people, not interested! I guess they saw our boat, haha.

We did eventually manage to sit down with them after dinner to find out some more about their journey. They made comments about our boat fitting in at one of the marinas in the Gulf of Corinth, as a lot of boats there were old and sinking. It was quite rude actually. They can have their brand new, beautiful boat and scowling faces. We are all smiles on old Sibia.

We were quite happy to leave early the next morning to go through the Corinth Canal. This is one thing Ryan has been most excited about for this trip. It was a mission to get there though. Of course, our head wind curse has followed us everywhere, so we were beating into 20 – 23 knot winds, and chop all the way there. What a pain!

We eventually made it, and thankfully it was more sheltered making the approach absolutely stunning. We only had about half an hour wait (which is quite short), paid a bunch (a lot) of euros to pass and were on our way. It was amazing.

The approach to Corinth Canal

Going into the canal 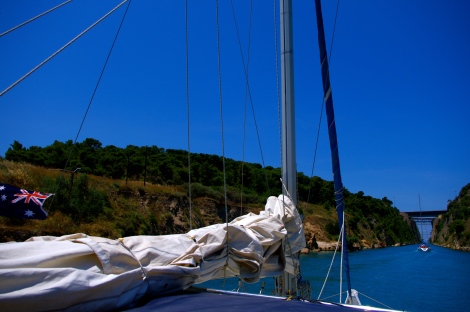 Us in the Corinth Canal 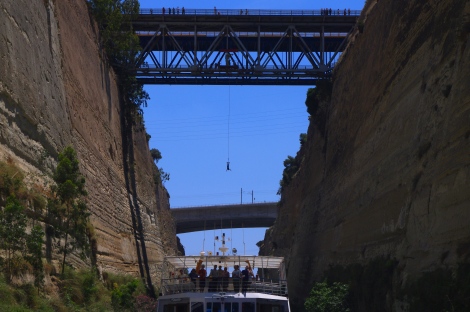 A bungee jumper from the bridge

Coming out the other end of the canal 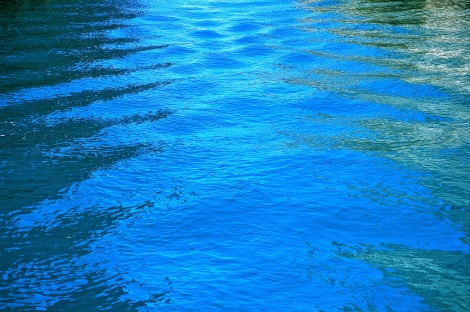 Flying seagull in the canal 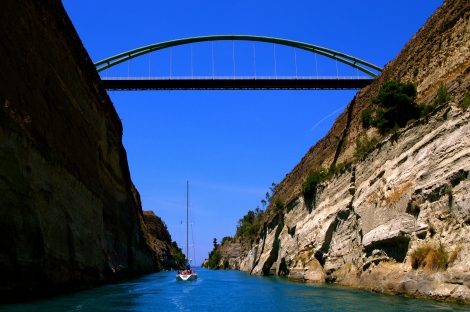 Gulf of Corinth end, with the bridge that lowers under the water.

After making it through the canal, we had only a short motor to the town of Corinth, where the marina was mostly empty. We were able to tie up side on to the quay, avoiding the need to anchor yet again. It took no time for us to find a Gyros shop, which had the world’s biggest piece of pork hanging from the rotisserie. Ryan ate two.

We then found a grocery store where we could stock up on all the supplies we needed at cheaper prices than in the small towns. We also FINALLY bought some chocolate for the boat!

Given we had been motoring so much, we also needed to fill up on fuel. Luckily, we only rely on jerry cans and were able to walk to the fuel station, as there was nothing at the dock. Unluckily, it was about a kilometer away. By this stage, it was quite hot!

We were dreading the walk back, and disappointed when the man at the fuel station told us there were no taxis around. So we began our long trek back, only to be stopped by the fuel man after about 50 metres. One of the service mechanics took one of the cars they were working on and drove us back to the marina, free of charge. We were so grateful, and yet again thrilled with the kindness of people.

Soon after our return, a charter catamaran full of Belgian couples moored behind us. They were lovely, and soon invited us onto their boat for some drinks. We sat and talked and laughed a lot, until it was time for dinner. Of course, dinner time (for us) usually coincides with sunset. I was right in the middle of cooking so could not go for a walk. However, I was able to capture the reflections from behind the boat.

Sunset reflections from the Corinth harbour

The next morning we took off for Andikiron. There was no wind, not even head wind really, to assist our sail. So we motored for the entire 30 nautical miles. The hum of the engine really got frustrating by the end of it. As we approached, we decided to check out some nearby bays to anchor in. The first had a fish farm, so we went to the second, called Ormos Isidhorou. Large cliffs frame the entrance to this bay. To the left side of the entrance was a small beach, with a swimming area absolutely packed with people, and music blaring. It seemed like a pretty cool atmosphere, and by the time we passed the entrance the music was only a small sound in the background.

The beach with the cliff bar, taken the next morning on our way out

There was a quay we could tie up to, again, despite the book telling us it would only be an anchorage. We were the only cruising boat there. It was quite peaceful, except for the man fishing with a bell at the end of his fishing rod.

On the other side, the view from our mooring

We decided to go for a beer at the beach bar, called Café Bar Annabelle. It was set on the edge of the cliff with three levels of decks overlooking the beach that was filled with beach umbrellas and lounge chairs. The crowd appeared to be all local Greek people, with a sort of Mykonos vibe, only without the tourists. It was nice to sit there for a drink, before we retreated back to our boat for Fajitas! We decided that if we moved onto the next bar for another drink it might turn into a big night ending with some sort of party on the boat. I think we made the right decision, given we had another 20 nautical miles to motor (again no wind) to Itea today.

That is where we are no, reunited with Ron and Kathleen. There is rain again. Only scattered showers, with some grumbling storms in the distance. Every time we are with Ron and Kathleen it rains. At least it’s not raining mud this time! I will tell you about Itea in the next post, as there will be lots of photos of Delphi, after we go there tomorrow.

Now a little bit about our boat, given a few of you have asked for more information.

It’s a 25 year old, 35ft Edel Catamaran. It looks its age. Everything (except the toilet Ryan installed) on this boat is old, making it hard work to sail. The sun, making them brittle and difficult to work with, has damaged the ropes. Once the sails are up, there are lots of creaks and groans. Getting the main sail up past the third reef is a major work out. I know they say you should not force anything, but this one takes all of the force I have. It got ever so slightly easier after Ryan lubricated the track. Despite all of this, we love the journey, and the fact that we don’t have to freak out if it gets a bit dirty, or too stressed as we approach a quay.

The layout of the boat suits us quite well. The two hulls each have a double aft cabin (more like king single) and single forward cabins. There is a bathroom (no shower) in the middle of each hull. Once side has a chemical toilet, and the other a marine toilet. There is plenty of storage space under each of the beds, however, so much stuff has been left on the boat we are scared to dig through it all.

In the center, between the two hulls is our saloon. 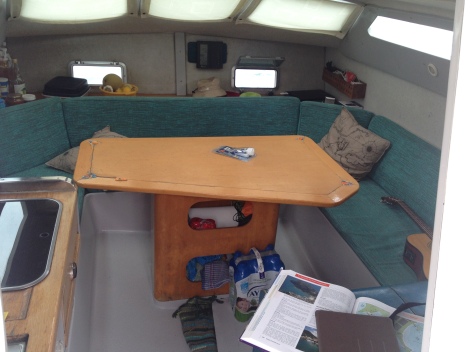 We have a sink, a cooker (but no oven), a fridge, a small chart table and lots of storage space. We spend a lot of time in there, as there is plenty of room to sit around the table and the weather is still cool enough in the evenings. Once the weather warms up, we may spend a bit more time in the cockpit. There isn’t really as much space as the saloon, if we decide to entertain guests, but there are still two tables we can set up out there. In reality, we don’t really have to worry about entertaining guests, because others don’t really feel the need to come and look at our old boat, or maybe don’t want to be seen on it?? Joking. We usually get invited elsewhere first, and are quite happy to accept the invitation.

In terms of sailing, we have only really had one good short sail on our very first day out of Porto Kheli. The boat went quite well. There is one thing that gets a bit frustrating, and that is the low tunnel clearance. As soon as the water gets choppy it starts slapping into the middle of the boat, where the saloon is. I think the table inside is going to fall apart by the time we arrive. Everything gets jolted and shakes. It’s quite unnerving. It is lucky the seas here are not overly rough!

In relation to the motors, the boat used to have two. One in each hull and they were diesel, which would have been much easier given diesel is more common to find here. Instead, now the boat has one 20 horsepower outboard motor. This makes maneuvering a lot more difficult, but Ryan has been doing it like a pro since the beginning.

I think the other sailors around get some entertainment watching us come into and out of harbors, between the one motor and the manual anchor. Despite the effort this boat takes, we are having the time of our lives and enjoying every minute of it. One day maybe we will be in a position to have one of those amazing boats with better motors, newer ropes and an electric anchor winch. At the moment, as long as this boat keeps us going from A – B, that’s all we need.

One response to “Korfos – The Corinth Canal – Corinth – Isidhorou – different company, more head winds, amazing scenery and a little bit about our boat”